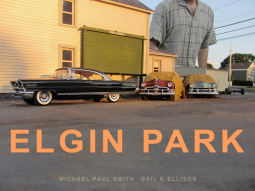 It is hard for me to differentiate what it is that I like most about Elgin Park by Michael Paul Smith. The book appeals to me on so many different levels. From the cover one gathers it is an art book containing photographs of scaled models but that’s like saying a book about Monet is full of pretty pictures.
This is the second offering from Michael Paul Smith displaying his incredibly detailed 1/24 scale models of scenes from the 1950s and 1960s – the years of Smith’s childhood. Originally discovered on Flickr.com and subsequently gone viral (he has over 14,000 followers as of this writing) the finished photograph of a scaled scene is shown first to the reader and then is subsequently built step-by-step with corresponding photos. To a dedicated hobbyist/artisan these photo series could easily serve as a “how-to” for pursuing similar artistic endeavors.
The book reaches another level of appeal as one reads the captions and text that accompany the beautiful photographs. Smith provides insights, commentary, and personal memories surrounding each of the finished photos in addition to including pertinent comments that were originally posted on the Flickr.com account. Having the opportunity to form your own thoughts and opinions about each photograph and then read Smith’s personal commentary and then others’ views is a unique and highly satisfying approach to providing an in-depth look at Smith’s craft.
As Smith’s work has matured and expanded he has begun spinning narratives around the different photographs creating the fictional town of Elgin Park. Elgin Park is populated with characters based on people from his own childhood and from his vivid imagination. Fantasy is also injected into the town with a section of the book reporting the crash of a perfectly scaled UFO! The entertaining narrative adds yet another level of creativity and enjoyment. Smith is also expanding into making faux advertisements that reflect the mid-20th century world of Elgin Park.
While Smith’s photos give the impression of a scene where a person has just stepped out of range of the camera lens, there are no “people” in his scenes. When asked why the scenes did not include a scaled population of Elgin Park citizens, Smith replied that it was an intentional decision on his part. Smith says, “Any time you can put yourself into a painting, film photograph, or story, it becomes a mirror for your own life.” ELGIN PARK: Visual Memories of Midcentury America at 1/24th scale makes the reader and viewer long for the opportunity to somehow transport themselves into these photos and live the ideal life Elgin Park offers.
Posted by Unknown at 3:51 PM 1 comment: